Golf and the 4th of July 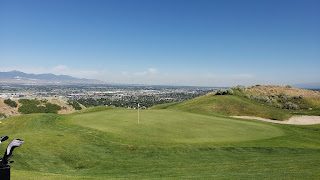 I'm not a good golfer, but yesterday I made this putt for a birdie.

I took the photo only because I was waiting for my buddies to hit their balls and it was such a clear day in Salt Lake Valley.

If you can't see the ball, it's on the left side of the photo. You can see it in the close-up, circled in red. 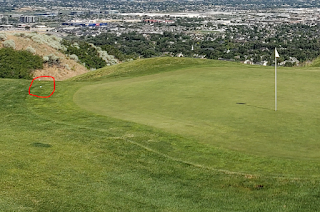 I mention this because ordinary people can do extraordinary things. Not that this was extraordinary, really, but making this putt was pure luck. I couldn't make it again if I tried ten times.

The Fourth of July is a good time to remember that ordinary people decided to take control of their lives and their country.

In our world, there are many people who want to control you by channeling your thoughts into the canal they choose for you. Think about that on this holiday, whether or not you live in the USA.
_____

Craft a thousand tweets before ten blog posts before one novel. Skim a dozen books before absorbing one. Make many small investments before a few big bets. Build many small products before starting a company. Explore, then exploit.

I have a twitter feed, but I use it mainly as an archive. I'll announce a new twitter feed in August.