Last year I discussed the growth trends in the Church.

A recent Times and Seasons blog post noted that the August 1993 Ensign included this projection:

If growth rates for the past decade remain constant, membership will increase to 12 million by the year 2000, to 35 million by 2020, and to 157 million by the mid-twenty-first century.

Those growth rates have not remained constant. The Church's 2019 Statistical Report released the week after General Conference reported 16,565,036 members. That's less than half of what was projected in 1993.

Nevertheless, there's a lot to be grateful for. Every time someone joins the Church, we are all enriched. The person joins a wonderful, world-wide family of believers in Christ who serve one another with love and compassion.

I spoke about that in my presentation at the FIRM Foundation conference last week.

Although convert baptisms are not publicly reported by country, much if not all of the increase can be attributed to Brazil, which had an increased membership of 35,319 during 2019. This was 24,502 more people than the increase in membership in 2018. Maybe having an Apostle from Brazil made a difference.

But there remain areas of concern.

In the United States, for example, the annual growth in Church membership was the lowest reported by the Church since approximately the mid-1800s.

The increase of convert baptisms in 2019 of 14,503 is in the right direction, but how does 248,835 compare? People tell me all the time that our missionaries face obstacles because people are more "worldly" and "less interested in spiritual things."

Maybe so, but is that a valid excuse?

BTW, it would be pretty cool to have a Church statistical report with as much detail as the Seventh-day Adventists provide. 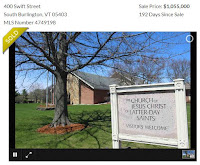 Last year, I mentioned the LDS chapel I saw for sale in South Burlington, VT. It sold in late 2019.

The buyer was the Islamic Society of Vermont.

Comments to the Times and Seasons blog post included these observations about Australia and Scotland:

In Australia the church say there are 155,000 members. There are 41 stakes, and 9 mission districts. The census say there are 60,000 members (not all claiming to be active). So maybe one third of claims.

I could go on, but I suppose most members outside of Utah can relate similar statistics.

Every member of the Church ought to think about what we are doing to help the work of the Restoration.
_____

There are undoubtedly many factors involved with missionary and retention issues. We can all think of lots of excuses for why the Restoration is not proceeding as it has in the past in terms of membership, awareness, activity, etc.

In my view, M2C, SITH, and other revisionist history and scholarly changes to what the prophets have taught continue to create barriers for outsiders to seriously consider conversion.

A better approach, IMO, is to read afresh what the prophets have taught, starting with the original sources from Joseph Smith and Oliver Cowdery. I discussed some of those sources here:

I can't make sense of the idea that it is a good idea to reject (or even modify) what Joseph and Oliver taught about the identity of the Lamanites, the location of the Hill Cumorah, the translation of the Book of Mormon, and other topics.

For example, to me, Joseph translating the ancient Nephite plates is a plausible scenario. The KJV itself is a translation of ancient languages. True, Greek and Latin were well known, but translation is a common human endeavor. The point of the Urim and Thummim was to "magnify to the eyes of men" the writing on the plates. Joseph studied the characters, copying and translating them with the Urim and Thummim. We can't say how it works, but the concept makes sense.

Mormon and Moroni abridged the ancient records, which makes sense. Moroni preserved the plates by concealing them in a stone box. That makes sense, too.

However, Joseph merely reading words that mysteriously appeared on a stone in the hat (SITH) makes no sense.

While that narrative is being taught in the Ensign, the Saints book, the current lesson manuals, etc., it directly contradicts the scriptures and what Joseph and Oliver always said.

There are exactly zero accounts to support this illustration that appears in the Ensign and recent Church videos.

Joseph Smith and Oliver Cowdery never once said or even implied that Joseph Smith produced the Book of Mormon by reading words that appeared on the stone in the hat.

To the contrary, they always said that Joseph translated the plates with the Urim and Thummim that Moroni placed in the stone box with the plates. The Eight Witnesses testified that "as many of the leaves as the said Smith has translated we did handle with our hands."

Obviously, if Joseph translated the leaves of the plates as these witnesses testified, the plates were not sitting under a cloth the whole time.

Until recent years, it was only the critics of the Church who promoted SITH. Now we read about it in the Ensign. The youth are taught SITH in seminary and institute. Presumably missionaries are teaching this in the field.

I can't imagine teaching people that the Book of Mormon was produced from a supernatural teleprompter, with the plates serving as nothing more than a prop on the table, hidden under a cloth, with the Urim and Thummim nowhere to be found.

After all, we're asking people to make the biggest change in their lives.
_____

I'm hoping that more and more members of the Church read afresh the teachings of the prophets, as President Nelson advised. In so doing, they will rely less and less on the theories of men, taught by so many intellectuals in the Church.

Maybe the pause in missionary work due to the corona virus will prove to be a time for reflection and renewal. Maybe we can read afresh the teachings of the prophets and recognize that their accounts make far more sense than the imaginations of the scholars.

People around the world who are staying home for public health reasons are spending a lot of time on the Internet. Some are learning new things and building their talent stacks.Here's a suggestion. Spend some time learning more about the Book of Mormon and related topics.Many readers of this blog are aware of the Expo, but there are always new readers here, so I'm bringing it to your attention.Here's the link:https://firmfoundationexpo.org/Enjoy!
Posted by jonathan3d at 8:46 AM No comments: